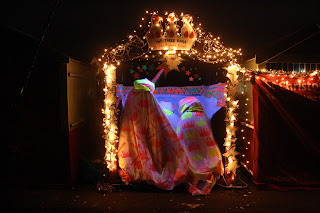 It's been almost a year since we last blogged, but we're back bigger and better than ever before.  Tonight the eighth Beach Hut Advent calendar launched to a huge crowd who had all come to see the hut created by St. Christopher's School Hove and themed around We Three Kings.

The great thing about having a school involved in creating a hut is that so many of the children can contribute, either by making art for the hut or by singing in the choir or doing various other bits of the preparation that goes into an event like this.

It also means that lots of parents come down to add to the crowd who have already heard about the calendar via a flyer or the huge amount of media coverage we've had in the last few days. 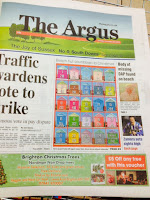 The calendar was featured on the front page of The Argus yesterday and they devoted a whole two page centre spread to the story of the huts, you can read their online article here.  BBC Sussex and Surrey Radio featured the huts on Sunday morning and Juice FM did a couple interviews yesterday while Heart radio have been promoting it all day.  Latest TV invited Revd. Martin Poole to sit in on half an hour of their news show yesterday afternoon to be interviewed about the event (you can watch that interview here) and tonight BBC SE TV turned up to record some interviews and do a live link into the local news at 6.45. 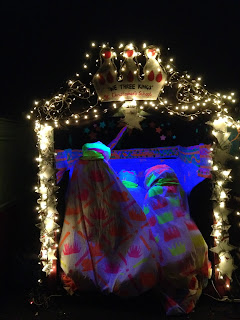 The hut art this evening used an interesting technique to create a visual effect which could only really work at night.  The kings were represented with draping swaths of white cloth which had been decorated using fluorescent paint.  An ultraviolet light was installed inside the hut, shining directly onto the fabric and illuminating the patterns on the cloth so that the colours sang out to the night.

The wise men from the East theme was continued with the star that hung above the hut tonight, guiding all the Beach Hut Advent Calendar pilgrims to the right place to receive their mulled wine and mince pies and the sing along with the choir. 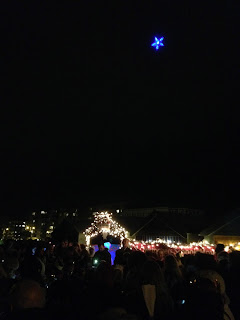 The next hut also involves a local school as St. Andrew's Church of England school will be creating Christingles in hut 225. 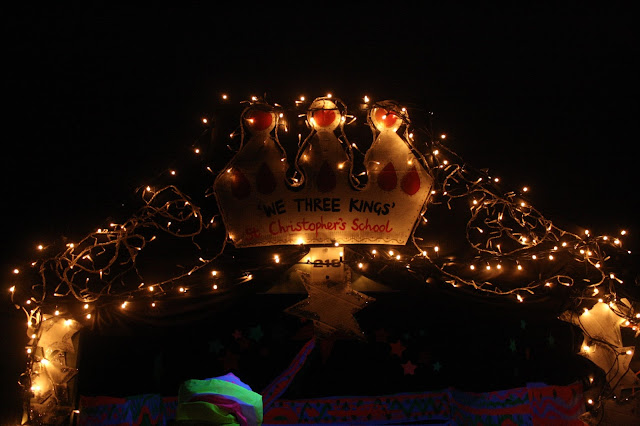