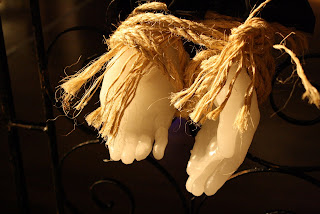 Easter came to a close for BEYOND at Easter Resurrected on Sunday 26th April where we brought together all the art from the Easter Path in one place at one time for a final viewing/meditation. Bringing things together into a new space gave us a chance to reinterpret some of the installations in a way that was appropriate for the space and with some additions.

During the hour we journeyed together from one installation to another following Jesus' path from Gethsemane to the cross. Station 2 was Jesus is condemned and originally this had been in Sydney Street Bikes where we had used the security grille in the shop window as a symbol of imprisonment with roped hands shackled to the ironwork. In the Old Market we suspended an old piece of wrought iron to make a three dimensional image of torture and restraint.

Dave's Comics also in Sydney Street put an amazing amount of thought into their display which featured a cross shape made from a series of comics about a 'godkiller' force that destroys a number of major superheroes. We added to this with images from the Manga Bible and some thoughts about the themes of death and resurrection which are so common in this kind of literature. 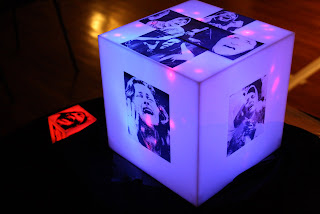 One of the other extensively reworked stations was number 9 at City News newsagents where Jesus meets the women of Jerusalem. The original window featured images of weeping women backlit and for our theatre installation we collaged these same images onto a series of colour changing lightboxes of various sizes.

An added bonus for those who came to the theatre was a station entitled 'Jesus is stripped of his garments' using a ripped and slashed suit jacket displayed in the form of a cross. This version of station 10 didn't work for the shop owner so we created something different around the soldiers throwing lots for Jesus robe which was the artwork eventually used for the Easter Path. Both images make us think about the importance we place on external appearance while God sees into our hearts.

Easter Resurrected finished with two neon crosses created by Andy Doig of Fishtail Neon which we installed on a darkened stage so that they spoke eloquently to us of the beauty and glory of the resurrected Christ symbolised by the empty cross. 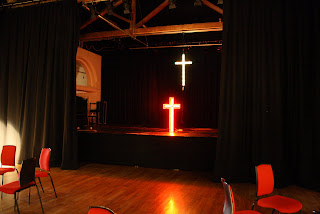 We also managed to get hold of a copy of the BBC South East Today news report which went out on Good Friday.

Our next event is on 24th May at the Old Market on the theme of HOPE.