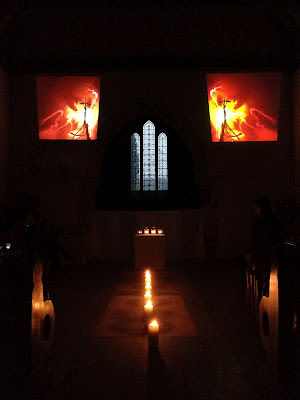 THE END OF THE CROSS 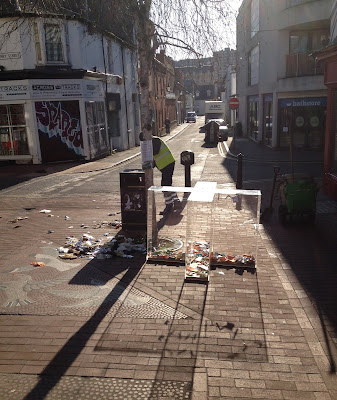 After braving the past 40 days (and more impressively, 40 nights) in Brighton's North Laines, our Lent cross has finally been dismantled. The installation endured bitter sea air and windy nights, people climbing all over it, batting it, kicking it, unscrewing it, promoting events on it, moving it, smashing it and things sticking to it. Not to mention the copious amounts of bird poo from the tree above. Amazingly, it was only smashed in the once, meaning that it only had to be removed on one occasion for a little TLC, which was completed within 24 hours.
The scars spoke powerfully of the similar treatment Christ received when he was beaten before eventually being nailed to a wooden cross. But just as Christ rose again on the third day, so this photograph of the cross on Easter Sunday bears a significant resemblance to the events of that day recorded in the Gospels. As the gardner (street sweeper) tends to the garden (Kensington Gardens), the body of Christ (Perspex cross) discards the burial clothes (litter) and ascends into Heaven (is taken apart before being removed).
A fair few hundred slips were posted into the Cross, which will now be used to create an artwork for the Brighton Festival throughout May.
Posted by BEYOND at 13:52 No comments: