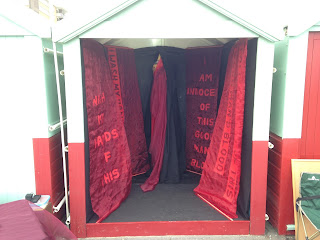 Tonight was rather grey and cold with quite a strong wind blowing along the seafront which deterred all but a few hardy souls down to the beach. 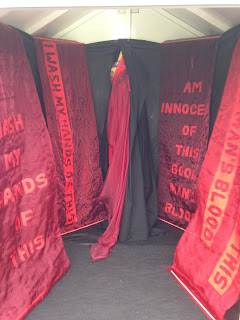 We were still there though with the fourth instalment of our artistic Easter story,  Tonight we were focussing on Pilate and his abdication of responsibility for Jesus even though he suspected he was innocent.

Matthew tells this part of the story in some detail: 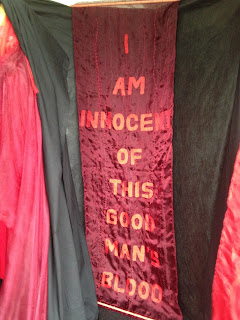 Jesus was placed before the governor, who questioned him: “Are you the ‘King of the Jews’?”
Jesus said, “If you say so.”
But when the accusations rained down hot and heavy from the high priests and religious leaders, he said nothing. Pilate asked him, “Do you hear that long list of accusations? Aren’t you going to say something?” Jesus kept silence—not a word from his mouth. The governor was impressed, really impressed. 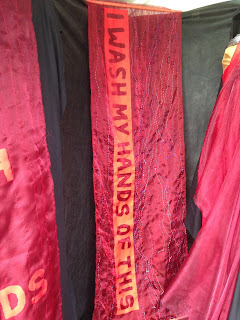 It was an old custom during the Feast for the governor to pardon a single prisoner named by the crowd. At the time, they had the infamous Jesus Barabbas in prison. With the crowd before him, Pilate said, “Which prisoner do you want me to pardon: Jesus Barabbas, or Jesus the so-called Christ?” He knew it was through sheer spite that they had turned Jesus over to him. 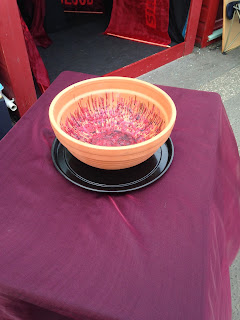 While court was still in session, Pilate’s wife sent him a message: “Don’t get mixed up in judging this noble man. I’ve just been through a long and troubled night because of a dream about him.”
Meanwhile, the high priests and religious leaders had talked the crowd into asking for the pardon of Barabbas and the execution of Jesus.
The governor asked, “Which of the two do you want me to pardon?”
They said, “Barabbas!”
“Then what do I do with Jesus, the so-called Christ?”
They all shouted, “Nail him to a cross!”
He objected, “But for what crime?”
But they yelled all the louder, “Nail him to a cross!”
When Pilate saw that he was getting nowhere and that a riot was imminent, he took a basin of water and washed his hands in full sight of the crowd, saying, “I’m washing my hands of responsibility for this man’s death. From now on, it’s in your hands. You’re judge and jury.” 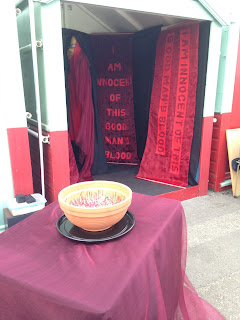 The crowd answered, “We’ll take the blame, we and our children after us.”
Then he pardoned Barabbas. But he had Jesus whipped, and then handed over for crucifixion.
The installation was made of fabrics which were drenched in the colours of blood and night, with banners hanging down quoting some of Pilates own words to a figure who stood in the middle with his back turned to us.  This represented Pilate turning his back on Jesus but asked us the question, "what do we turn our backs on, and what responsibilities do we wash our hands of.

There was a bowl of water, stained red, for attendees to wash their hands in but the cold and wind was a strong disincentive for this activity.

The question still stands for us all though - what do we abdicate responsibility for? 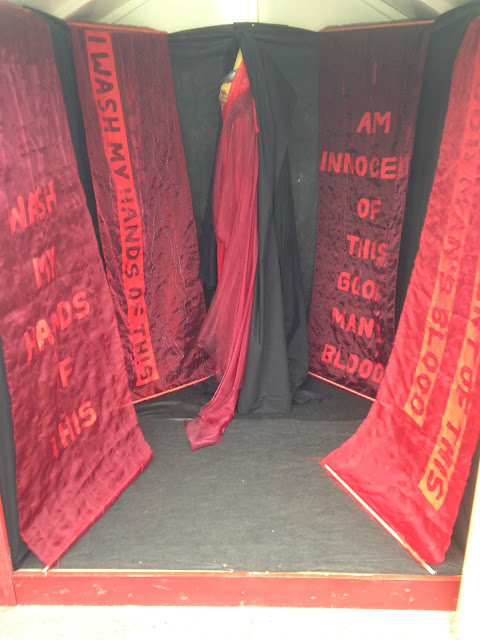