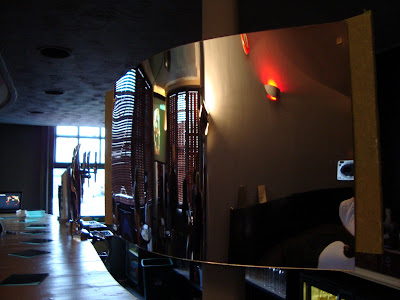 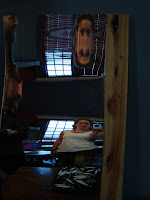 Reflections was the start of the new season of BEYOND events in a new venue with a new way of doing things. We met in the upstairs room of a pub in Hove called The Alibi and on reflection it was a good move which prompted a very different atmosphere to the Old Market venue we have been using up to now. Rather than follow a set programme as we have at previous events we threw out various ideas about reflection and let people talk and think about them as they wanted to so there was a lot of discussion and free flowing conversation throughout the evening. 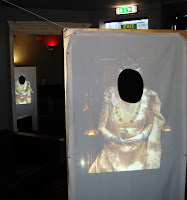 The room was setup with lots of different kinds of mirrors including some fairground style ones that we had made for the event and an interactive projection/reflection area where people could place their face into a frame and see themselves imposed onto images of Mother Teresa or Hitler or Marilyn Monroe.


We had some great films to watch including something we found on Youtube called Mirror, Mirror on the Wall and a fantastic version of Man in the Mirror by James Morrison which we set to a series of pictures of the changing faces of Michael Jackson. 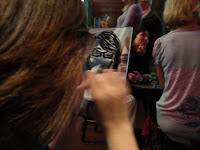 Everyone got a chance to spend 5 minutes looking at themselves in a mirror, not something we often do in everyday life and quite an uncomfortable activity for some. Each person wrote about what they saw in their mirror and some of the things they would change if they could.

Taking some quotes from John O'Donohues Anam Cara brought us to thinking about the spiritual aspect of looking at ourselves:
The body is a sacrament. The old traditional definition of a sacrament captures this beautifully as a visible sign of invisible grace. All our inner life and intimacy of soul longs to find an outer mirror. The body is the mirror where the secret world of the soul comes to expression.
This led us to consider the other aspect of reflection which is to do with contemplation which is of course what we'd been doing all evening. We finished with the realisation from 1 Corinthians 13v12 that: 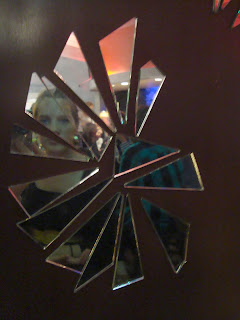 At present we are people looking at puzzling reflections in a mirror. The time will come when we shall see reality whole and face to face! At present all I know is a little fraction of the truth, but the time will come when I shall know it as fully as God now knows me!
As a symbol of that we had set up a dressing table with a few small fragments of mirror and someone trying to brush their hair in it without really being able to see. Everyone was given a shard of mirror and encouraged to add their shard to the mirror to help to make a more complete picture.

Finally everyone left with a small reminder that we only see a part of the picture now but one day will see everything. if you want one of these email us your address to info@beyondchurch.co.uk and we'll put one in the post.

Our next event on 25th October tries another venue - The Basement in the heart of the Laines in Brighton - a very cool artspace which we hope to use to it's full underground advantage as the theme is Dark.

Finally a little postscript to Greenbelt in the form of a video about the ice sculpture posted by Michael Radcliffe.
Posted by BEYOND at 21:12 No comments: