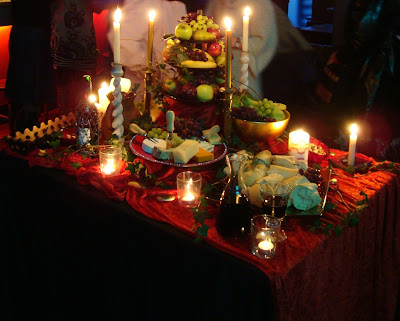 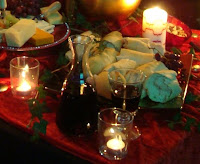 As people arrived in the upstairs room of The Alibi, they were greeted by an oasis in the form of a lush table-scape complete with fruit, bread, wine, and cheese. This oasis represented a form of refreshment that we all require in our daily lives. Refreshment can take many forms such as physical, emotional, and spiritual. Each of which were touched upon during the evening.

A familiar party game kicked off the evening as each person in the
room had a sticker on his or her back with the name of an inspiring
person. The point of the game was to find out who you were by asking different people int he room yes or no questions, such as "Am I English?" or "Does my profession relate to science?". Many found this to be a difficult exercise, however enjoyable. A short video was shown with an audio clip describing Jesus as the "living water" and how he can refresh us; mind, body, and soul. 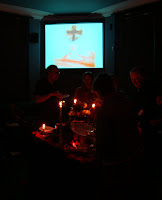 These ideas led us to think about people in our personal lives who inspire and invigorate us. We took time to discuss these people with those around us and share inspiring stories. To make the idea even more apparent, everyone took a paintbrush and wrote the name of the person who refreshes them on a piece of paper which only works with water. As water hydrates us, so do people in our lives.

Bill Viola, an artist who mainly works with film produced a video where a man was completely drenched in water to the point where you could no longer see him. Similarly, we want and need to feel renewed and invigorated at different points during our life's journey.

Bread was then broken, and a correlation was made between communion and people sharing a simple meal together as we did that evening. The food nourishes our bodies, while the company of others feeds our emotional selves, and the spirit of God works through it all. There was a buzz about the space that evening and a feeling of connectedness. 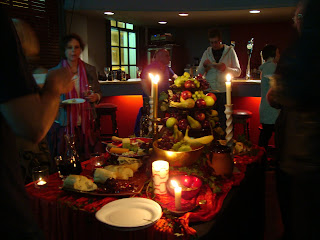 Our next event is the Easter Saturday Special which will explore the empty space between death and resurrection. It is taking place on the 3rd of April in the cellar at The Old Ship Hotel from 7.30pm - 8:30pm.
Posted by BEYOND at 12:28 No comments: