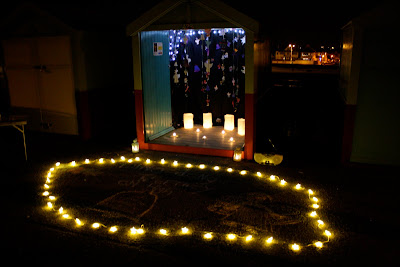 It was a perfect night tonight with hardly a cloud in the sky and no wind so that the sea was a calm as a millpond. On top of that we had some spectacular natural effects as there were occasional flashes of lightning out to sky, a sky so clear you could see satellites passing overhead and three quite spectacular shooting stars in the hour we were out.

Elaine had created a host of angels and bells in her hut as her theme was Ding, Dong, Merrily on High. The children had also created some pavement art on this same theme and provided an area for more art to be produced throughout the evening.

The better weather brought out more people and we had good numbers tonight, including one of our initial regulars who had been missing for a week or so with a bad case of bronchitis. Quite a little community has formed through these weeks of pilrimage and we've been privileged to get to know a number of people as we've walked together toward Christmas.

Our penultimate hut this year is number 268. 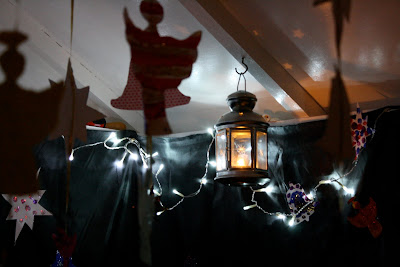