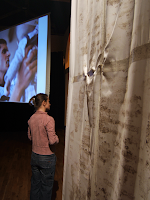 CLEAN started by making people deliberately dirty up a large white cloth laid across the entrance to the theatre and to add insult to injury we'd added a load of mud outside the door so no-one could avoid being involved in the soiling process! Later on, that cloth became the centrepiece for our evening which was shaped around the idea of one long confession. In a regular church service we skate over the confession quite quickly at the beginning of most acts of worship but CLEAN was an opportunity to really think about how we have spoiled things or been spoiled, and to actively do something about that.

We learnt that Christianity is one of the least hygienic religions and in times past has been regarded as distinctly unsanitary by other religions who place a lot of emphasis on regular washing, both ritual and otherwise. We also got a chance to think about what we regard as wholesome or not by looking at pictures placed around the walls and writing our reaction on them. 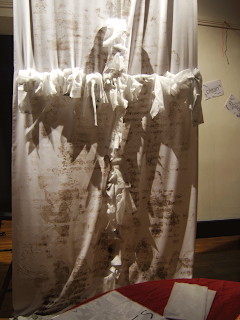 We discovered that wiping away our sins isn't always as easy as we'd like as we all wrote about things that we had done wrong on mini white boards and tried to wipe these clean with cloths that eventually found their way onto the cloth in the form of a cross - where all sins are wiped away for ever.

The evening finished on a positive note with a storm of bubbles as we all washed our white boards and ourselves in the pool in the middle of the room and everyone was given a piece of soap to take away with them as a reminder of clean living. 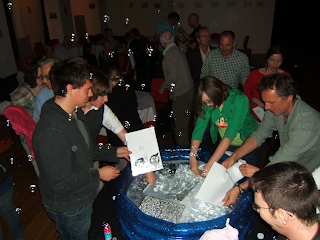 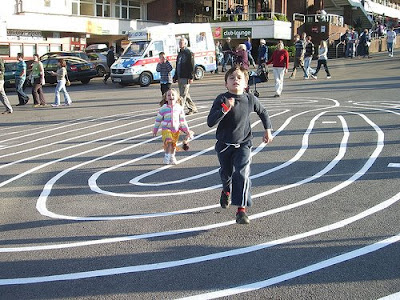 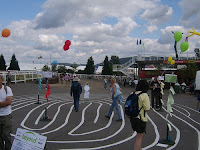 We've had a busy August taking the Fingermaze concept to Greenbelt and using over half a kilometre of gaffer tape to create a labyrinth on the tarmac in the main concourse area. Over 15,000 people were at the festival and it was great to see them interacting with the labyrinth in all kinds of ways from kids riding their bikes round it to teenagers making up their own games on it at one o'clock in the morning.

We ran guided meditations every lunchtime and about 300 people took part over the three days.


Following this I thought it might be interesting to produce an animated version of the meditation as a short video. It's just under 7 minutes and is a chance for quiet reflection about who you are and how you relate to God and the world.