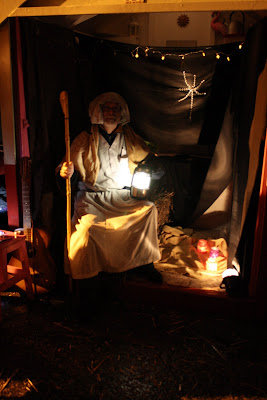 Tonight was the worst weather so far with constant rain and a cold wind which made putting everything together extremely difficult (and uncomfortable!).

This is the kind of weather that hardy shepherds would have been used to as they stayed out all year round looking after their flock. Tonight Janina had recruited just such a hardy soul to sit in hut number 324 as part of her theme, although he had the advantage of a modern umbrella as some protection against the elements.

The backdrop featured a glass beaded star and despite the wind and rain a few candles managed to flicker in the darkness, adding some warmth to the darkness in the hut.

Nights like this make you wish we were doing this calendar in Australia in the nice summer sun but at least it gives us some insight into the kinds of hardships that some of the characters of the first nativity could have endured.

Next hut is almost right in the middle of the Hove seafront at number 268. 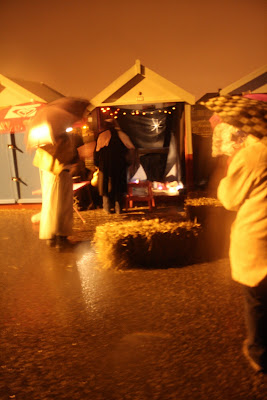 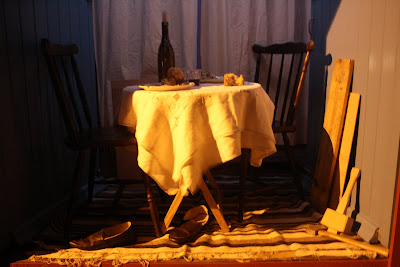 The hut this Sunday night looked as though it had been abandoned, and not just because lots of people were at carol services this evening. The theme was Nazareth and the hut was set up as though it was Joseph's home and he and Mary had left in some haste to get to Bethlehem for the census.

To make sure they would manage the journey OK our team imagined the holy family had a meal before they left and the remains of the bread, fish and wine were still on the table waiting to be cleared up on their return.

We knew this was Joseph's hut because the tools and materials of his trade were stacked outside. It's interesting to think about the ordinary daily life that Jesus was being born into on that first Christmas and the effort that Mary and Joseph must have gone to in travelling from their home to Bethlehem so close to the birth of their son. 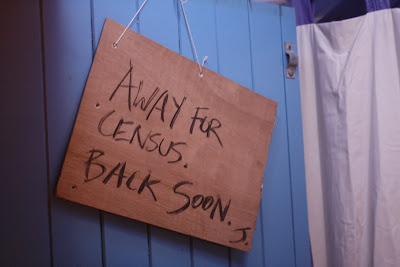