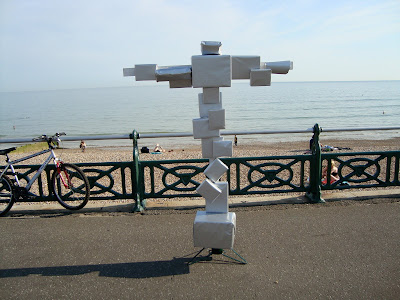 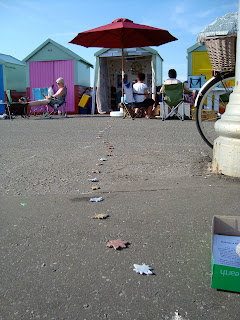 On the hottest day of the year so far, while most of the country were inside watching England get thrashed by Germany, we were out at the beach with a summer art installation.

During the beach hut advent calendar in December many people asked us if we could do something in the summer and so 6 months later we thought we'd give it a try. The idea was not to re-create huts from last year but to re-imagine some of the themes for a summer setting.

We took Isaiah 9 as our inspiration - The people walking in darkness have seen a great light; On those living in the shadow of death a light has dawned. The art that was showcased in the cold and dark of midwinter was now exposed to the glorious sunlight of midsummer. 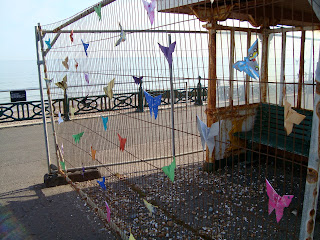 A number of huts were open by Hove Lagoon including one which had been open on the coldest night of the year last December.
We also arranged other pieces of art around the area to create an open air exhibition/installation. We were also able to use some of the things that were already there and turned an old rusted shelter which had been fenced off into a piece of art with origami butterflies created by one of our team.

Scattered around the area were various aids to meditation which we also gave to passers-by in a leaflet explaining who we were and what we were trying to do. 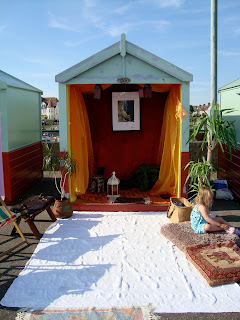 This included some words from the Anam Cara:

I arise today
through the strength of heaven
Light of sun,
Radiance of moon,
Splendour of fire,
Speed of lightning,
Swiftness of wind.
Depth of sea,
Stability of earth,
Firmness of rock.


It was definitely nicer to be out at the huts in the summer and we've already started to think about how we can create some kind of summer beach hut event for the future. In the meantime our next two events are also outside as we're doing a Blessing of the Surf at Paddle Round the Pier next Sunday 4th July at 9am and will be on the Hove Park Fingermaze on 25th July. 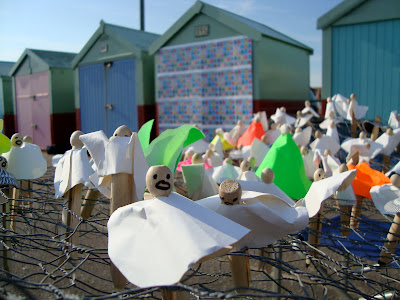 I love that wonderful old celtic prayer. Thankyou for that!