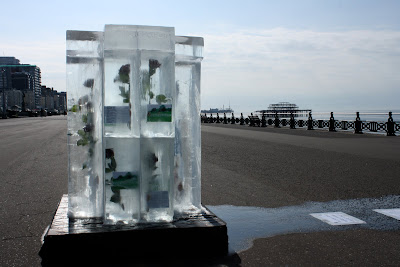 Saturday, May 15th was a very busy day for Beyond. The morning began with an installation of an ice sculpture on the Hove seafront. It was a place for people to take a moment while walking along the promenade to reflect. As people approached the ice, they were greeted by a subtle cross shape which formed the entire sculpture. Various items were embedded inside the ice which caught attention. Facing the seafront was an image of Jesus surrounded by angel wings and seashells. Around the edges were dark red roses with additional shells and Beyond postcards which advertised our Fringe Event: Pete Rollins' Insurrection Lite talk that evening.

Reflections accompanied the icework. One read:
"God's voice thunders in marvellous ways; He does great things beyond our understanding. He says to the snow, 'Fall on the earth,' and to the rain shower, 'Be a mighty downpour.' At his command the tempest comes out from its chamber, and driving winds bring the cold. The breath of God produces ice, and the broad waters become frozen." Book of Job Chapter 37.

Another:"This is a place to contemplate the passing of time as this giant block of ice melts to reveal the secrets that are hidden within it. Visit and revisit to see how it changes as people interact with it and the weather affects. Take time to refelct on the forces of nature that have shaped our world through the ages and how this relate to the idea of an eternal God. Be still in the presence of the Lord, and wait patiently for Him." Psalm 37

People were encouraged to revisit the sculputre and see what changes took place. We met many peole who came by again and again to witness this. Most people were surprised to see how quickly the ice melted, revealing the secrets within. Visitors, young and old engaged with the work, touching it and removing shells and postcards only to replace them. We were surprised by the respect people had for the artwork and the careful way it was treated during the day. However, when we went to remove the sculpture in the evening it looked as though someone had knocked it over on it's face as it lay crushed on the ground. A testiment to the different ways we as people engage with our surroundings and the earth daily. 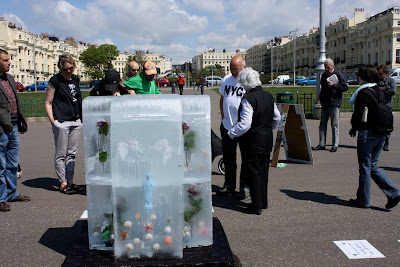 Click the link below to see a Photosynth of the ice block by David Peck:
Photosynth
Posted by BEYOND at 14:09

it looked really good! I am so bummed I missed out on the day!