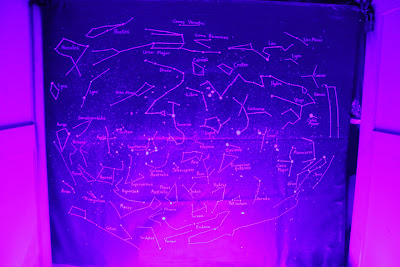 The penultimate hut of 2011 directed our eyes to the skies with an amazingly detailed map of the heavens with stars and constellations labelled and drawn out for us all to see. Unfortunately the weather didn't aid our stargazing as the clouds scudded by propelled by some very strong winds, only stopping to drop copious amounts of rain on us from time to time.

Hut 449 was bathed in a beautiful royal purple light in honour of the coming king and as a reminder that this is still Advent, the season for which the church uses the colour purple. In fact the light was ultraviolet and was designed to make the white stars and constellations shine out into the darkness. One of the odd side effects of this was that it was very hard to see the images properly - they appeared to be out of focus no matter how hard we tried to look at them and bring them in to focus.

Even the photographs we took seemed to have trouble focussing on the star imagery, creating some lovely, colourful effects.

Lots of people had fun trying to decide which of these was the star of Bethlehem and even though Jon, the creator of the hut, knew which star he had nominated for that role, he kept this information to himself and let everyone spend their time star -gazing and guessing.

Our final hut is number 225 and for the first time we will bring together all the characters that we have been focussing on during our journey through Advent to form a unique Beyond nativity scene. The theme will be 'Gathering for the Great Event' and we will be creating a host of witnesses from photographs taken of some of the participants each night as well as welcoming a crowd of people and a live donkey to join in with our retelling of the Christmas story and singing of carols together to celebrate. 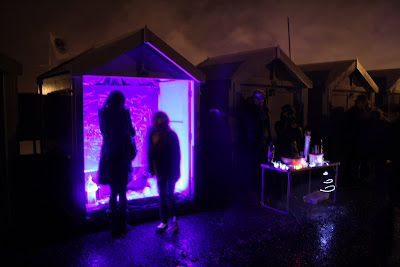