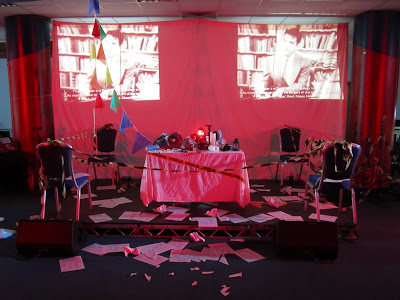 As festival-goers queued up for our main BEYOND event on the Saturday night of Greenbelt, a warning was issued. A figure in a red boiler suit, complete with face mask shouted appropriate caution, whilst handing out disclaimers for people to sign if they still wished to enter. Many decided against it; they turned and left. For those who made it past the threshold, it was at their own risk. 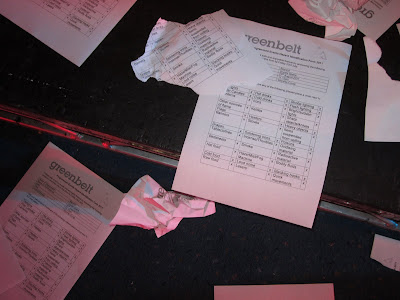 With today's obsession with Health and Safety, it is only natural that we as an events team are handed Greenbelt's own list of prohibited items/fluids/sounds. Therefore, we ensured that all of these items were most definitely present, albeit roped off with hazard warning tape. Flashing lights, sharp knives and raw meat were well out of reach. The true hazards were more philosophical and theological in nature. 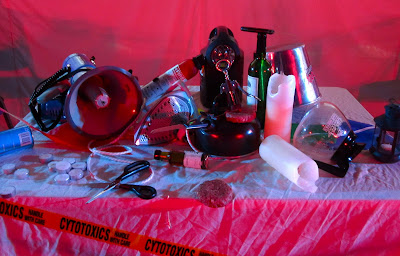 For many, Health and Safety rules are less important than what we expose ourselves to spiritually. There are some who will not allow themselves to consider, even for a moment, that they do not have all the answers. In contrast, there are people who push the boundaries of our theological thinking into places that are uncomfortable and to some, unnecessary or even blasphemous. However, BEYOND aims to provoke questions, to encourage people to grapple with ideas about God rather than signing up to an established line of dogmatic thought where questions are irrelevant. This was the very essence of our Unsafe Space. 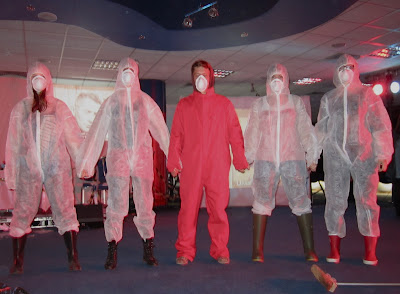 Upon entering, visitors were faced with a large room bathed in red light and manned by figures in white suits. On the left, two projectors flicked silently between numerous images of a controversial and religious nature. The table in the middle was littered with the banned items and Health & Safety Lists were scattered around it. Above the table, two more screens played clips taken from interviews with people such as Rev Klaas Hendrikse and Thomas Altizer on the death of God. Their voices were loud and clear, as though addressing each person in the room individually. Were it not for these interviews, the only sound heard would have been the eerie children's voices singing Sunday School songs about Jesus' love, coming from the back of the room. The familiar songs played awkwardly, in high-pitched tones as they contested the imagery in the room and heightened the already uncomfortable atmosphere. 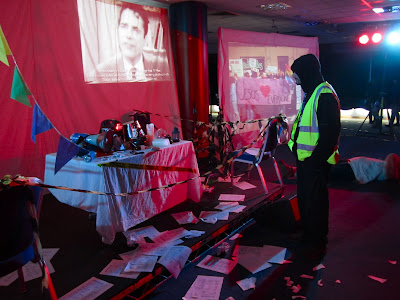 The room filled steadily, as some groups of people gathered on the floor, expecting an introduction or announcement. Realising that the suited bodies were providing no such entertainment, they were left to discover various stations at the back of the room. Two masked figures held boards with highly ambiguous quotes from Jesus. Famous lines with divided opinion, such as: 'Do you think i have come to bring peace on earth? No, i tell you, but rather division.' Another suited body lay motionless, spread-eagle on the floor in front. 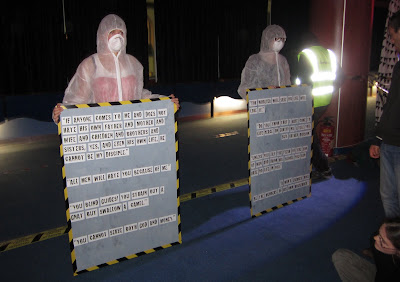 In the far corner, Peter Rollins sat waiting to ward off challengers and engage with some of the evolving questions throughout the evening. Famously celebrated as a heretic by those in opposition to his writing (most notably How (not) to Speak of God and The Orthodox Heretic) he had formed quite a gathering by the end, as listeners sat transfixed by his thoughts.
Elsewhere, there was an opportunity for visitors to contribute to a large scale of certain things, based on whether they regarded them to be unsafe or safe. The response varied dramatically, as shown below. 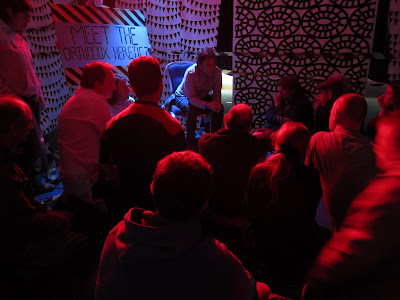 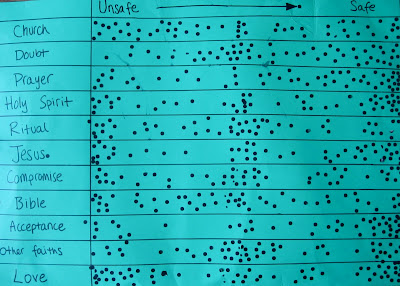 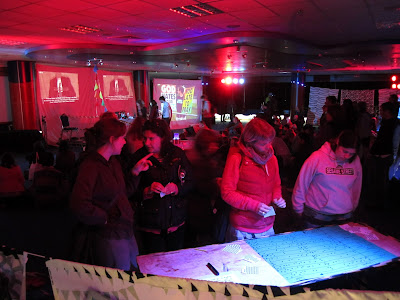 Next to the scale stood a small transparent safe with a slot in the top. People were encouraged to take a square of paper and write on it something that they'd never dare say in public. It could be a question, a secret, a thought or idea...and they were posted in The Unsafe Safe. The response here was overwhelming in creating some beautiful, honest, dark and courageous notations. It seems that for some, the Unsafe Safe operated as a vessel for confession. They are posted below.
Participants were wished well upon departure and given a glow stick to guide them safely back to their tents in the dark. Ironically, a select few remained, feeling far more safe and at home in our 'unsafe space' than elsewhere, where perhaps questions are not necessary.
"Why can certain sectors of the church fail to accept all people in spite (or because) of race, gender and sexuality, when Jesus accepted all people. WWJD."
"Sometimes I'd just like to get off the world for a bit."
"Theocracy for Heaven on Earth?"
"I am scared of telling people that I have started seeking God again after years of hurt that was caused to me by my previous experiences of 'church'."
"How old is God?"
"Am I really living, or is my life just a pretence?"
"I am scared it's all myth and my ordination is meaningless. I can't turn my back on Jesus but what if it's all just a psychological need and not true?"
"Is Jesus gay?"
"Using drugs for connection and spiritual growth."
"What if I am wrong and God really hates gay people?"
"Insecurities about my talent for the thing that i really want to do."
"I believe that somewhere in every church, the Holy Spirit is desperately trying to tell us that the Bible is not infallible. Useful, yes. True? Maybe. But, when Paul wrote letters he very obviously wrote as a man. We are missing the true relationship with the Holy Spirit because we are looking at a book."
"Join Hacktivists Anonymous. 'Fight the good fight'."
"Christians slamming & condemning others on Twitter & Facebook'."
"Masturbation."
"I would love to be free to challenge the need for money in the C of E. How do I as a vicar say words that may challenge people beyond their financial allegiance to their local social-religious club, where they have power because of wealth?"
"Paying (due) tax. (Self employed)."
"Why do we care what people believe? If they live out lives of love and justice, surely that is all that matters."
"Being alone."
"I believe it is possible for a child abuser to be a Christian. Pray that they will be healed and God will protect His precious children. We all fail God, some more than others. I was molested by a Church of England vicar when I was an 11 year old boy. Child abuse is not only in the Roman Catholic Church, all denominations could be suffering from it."
"Where is God? When is God? Is God?"
"Why does the ideal way not always seem to be God's way?"
"If emergence is true - what is the lie?"
"What do I do - as a Christian - about over-powering sexual desire?"
"Sometimes I doubt so much I don't know what to believe."
"I live several lives - church, work, friends, family - God's presence in each is different."
"Church is preventing Christ from continuing to live in us because of the material building and glitter and dreams we focus on instead."
"What if Paul was right about who will inherit the Kingdom? What if I've disqualified myself by my actions?"
"Fancying other people."
"How did God get born/created in the first place?"
"Is God actually real??
Would God mind if I kept the pen??"
"If the Christian Church really believes that 'all women are beautiful' or whatever else we get told at womens' breakfasts, then why do single Christian men treat single Christian women LIKE SHIT??"
"Has God left His creation to get on with it, alone?"
"Christianity and Paganism."
"Fuck the system. ('Slavery')."
"The conflict between Christians in the US."
"What if hardcore evangelicals are right?"
"Life makes me anxious. Every day I wake up and I think - 'how can I make life safe for my children?'"
"Porn is OK."
"Is there a right and a wrong? Where does grace start and finish and affect right and wrong?"
"How do we include paedophiles in our communities?"
"I lied big time to stay safe."
"Is this a question?"
"How do I / we reconcile the contradictory / paradoxical words or message of Jesus as recorded in the gospels?"
"Where is the boundary between uncontrollable addiction and personal choice? Am I to blame?"
"Smoke weed."
"Why is there this tension between 'being out' and 'don't ask, don't tell' ideas from different churches?"
"Not sure where my marriage is going."
"I am ashamed of my behaviour with someone else who is in this room."
"That being a lesbian is utterly accepted everywhere EXCEPT in church."
"THE BIBLE IS JUST A BOOK."
"Paul never stopped being a zealot Jew. He just changed to make Christianity bad."
"To what extent is homosexuality a scar of inadequate upbringing?"
"Christianity is just pharisees in a new way."
Posted by BEYOND at 16:39

This was an awesome installation and I congratulate you all for your vision in delivering this. As one who loves to chgallenge and subvert, I thought it was highly stimulating.

Interestingly, I was SOOOO tempted to march up to your table, break the safety tape and start fiddling with your dangerous objects in a deliberately provocative way: if as you seemed to suggest there were no boundaries, then this boundary begged to be crossed. I didn't, because I was worried it would upset the good people of Beyond that I know. What do you think I should have done? Would you have welcomed it or been upset by someone forcing their participation into your installation?

Hi, glad you enjoyed our event and found it stimulating. Interesting reaction to the installation..! Not sure we were suggesting that there are no boundaries, but also have no idea what would have happened had you gone and fiddled with the objects. Don't think anyone from Beyond would have minded/noticed, but one of the H&S people may have carried you out!

this health and safety thing has just become unexpectedly topical ;)