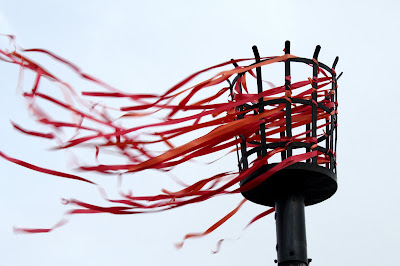 The first event in our Elements series this summer was FIRE, which took place on 22nd May down on the seafront near Hove Lagoon. Billed as the relighting of Hove's beacon for the first time since 1988, alternative plans unfortunately had to be made due to the strong winds. Setting fire to the beacon proved near impossible, so red and orange ribbons were attached instead, making for a striking scene as the vibrant colours were blown vigorously and noisily above our heads. They remain in place even now, and look impressive from the roadside. Holy Space was marked out below the beacon with white tape, an area where visitors were invited to enter without their shoes. A burning bush had been created at the centre, ablaze with red and yellow cellophane. Visitors could contribute to this installation with more leaves/flames, having written on them one thing from the past they'd wish to set fire to, along with one thing they would like to be on fire for.
There are multiple Biblical examples with references to God and Fire, so various quotes were handed out along with pictures to aid contemplation. There are numerous preconceptions that we tend to hold on to regarding Heaven and Hell, so this was a wonderful opportunity in a unique setting to really grapple with these ideas and why we may/may not believe such things. In one
sense, we wanted to set fire to our beliefs as we discussed these things, to be more open to God in the here and now, as He seeks to bring Heaven to Earth. 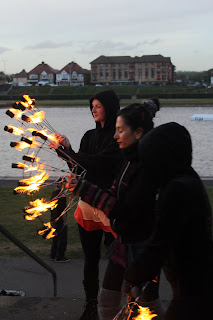 Yet more fire surrounded the event as we enjoyed a barbecue along with a special performance
from Brighton based Pyro-performers, Circus Seen. Visitors were dazzled with some of the dangerous moves of these fire dancers, while the flames did well to hold their own against the windy conditions. Everyone was given a lighter as they left, to remind them perhaps of what they'd decided to set fire to, what they hoped to be more on fire for, or simply just as a reminder of some of the challenging conversation that took place. It was helpful to be in a relaxed environment, enjoying food and performance, whilst wrestling with some of our ideas of Heaven and Hell, where these ideas came from, and the notion that maybe, just maybe, those ideas aren't necessarily true. 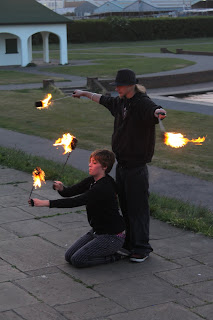 What it does encourage
us to do, is to seek God now, rather than perhaps holding
on to ideas or places that somehow seem rather distant. These conversations will follow on nicely with our next event, EARTH, on June 19th. Come prepared to discuss just how we can be involved in bringing Heaven to Earth right where we are.